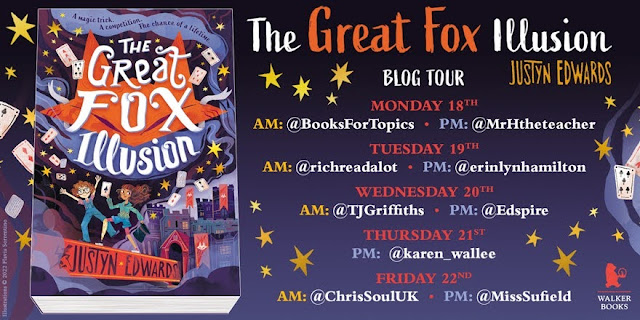 It's my turn on The Great Fox Illusion blog tour today and I'm delighted to share with you my original review of this delightful book that has gone down a storm with my class at school.
The world's greatest illusionist, The Great Fox, has died, leaving behind him a legacy of tricks.  Now a TV channel is running a competition for children to win the right to that legacy and Flick is determined to win.  An accomplished magician in her own right, her desire to win is different to the other eager contestants as her father was also a magician and she believes that his greatest trick, the Bell System, was stolen by Fox and lies somewhere in his house.  She is determined to get it back and find her father, who has gone missing, no matter what it takes. 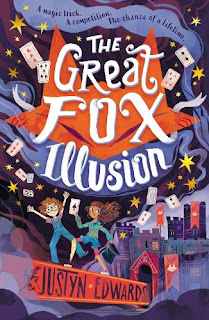 I think The Great Fox Illusion is the first book I have read that has been so dominated by magic tricks and looking at how they are performed.  As a child, I remember watching The Paul Daniels Magic Show (yes, I'm giving away my age!) and wondering how on Earth he managed to do each trick and, even now, magicians baffle me with their tricks, so I loved that this book gave me an insight into this - I found myself trying to figure things out before the characters could (spoiler alert: I couldn't!)

Flick is one of those main characters you are immediately drawn to.  She isn't particularly showy and doesn't want to bring attention to herself; she has one aim and is determined to achieve it.  Having lost one of her legs in a car accident, she refuses to let herself be seen as different and, even when her prosthetic is causing her problems, she refuses to be defined by it.  I also liked the relationship she forms with Charlie: they are very different to one an other but complement each other perfectly.

I have to give a mention to the Fox's house which deserves to be classed as a character in its own right. With a host of ever-changing hallways and rooms, not to mention the lift that seems to have its own personality, the house is alive with magic and intrigue, and I absolutely loved it - you never quite knew what to expect and I could fully imagine going into it and never being able to find my way out again!

The Great Fox Illusion is an exciting story about inner-strength, determination, family, friendship and never giving up.  It's a book that you'll pick up and won't want to put down, even once you've finished it; it will leave you wanting more and I, for one, can't wait to see what's in store next.

Due for release on the 7th April, The Great Fox Illusion is a book that needs to magically find its way into your shopping basket! 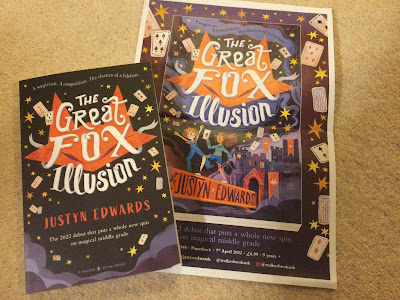 at February 20, 2022
Email ThisBlogThis!Share to TwitterShare to FacebookShare to Pinterest

Anisha is back in her fifth book and this time it's Hallowe'en, and for the first time in years, the school is having a disco.  Le...