Ok, so I may have just realised that we forgot to post January's blog so it's now become a mash-up of January & some of our February reads that we haven't yet posted about...

The Kid Who Came From Space - Ross Welford 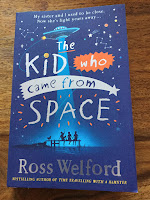 When Tammy goes missing on Christmas Eve, the entire village is devastated, but nobody more-so than her twin brother, Ethan.  Whilst the village mobilises to search for Tammy, it's Ethan and his friend Iggy who discover the truth: that she's been abducted and is being held as an exhibit in a human zoo on an other planet.  It's up to Ethan, Iggy and their new friend, Hellyann, to try to save her.
This is a great book that shows what the disappearance of a child can do to a family and how heart-wrenching it is.  However, it also shows the power of sibling (and twin) love,as well as friendship (from whichever planet your friends may come from).  What a brilliantly different story this is that reminds us of the importance of our thoughts and emotions, and prompts us to always do our best. 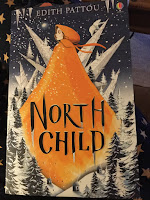 Rose was born facing north, something her mother tried to hide to stop the prophecy that all north born children need to wander and explore.  When her sister becomes very sick, a white bear arrives and offers to heal her if Rose leaves with him.  She agrees and so begins an extraordinary journey to a mysterious castle and then onward, for Rose and the bear are destined to be together ... aren't they?
Beauty and the Beast meets The Lion, The Witch and The Wardrobe, with a very definite sense of a traditional tale in the writing and the way it's told.  I really enjoyed this book and it's perfect for curling up with this winter. 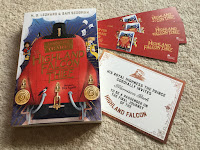 Harrison Beck is being forced to spend 4 days on an old steam train's final journey with his Uncle Nat whilst his mum is in hospital having his baby sister.  It's fair to say that Harrison is fed-up with this and really isn't looking forward to his time on the Highland Falcon.  However, when precious jewellery goes missing, things take a definite turn for the better (for Harrison anyway!).  But can Harrison and his new friend, Lenny, get to the bottom of the mystery before the end of the journey.
Harrison is a bold and adventurous young man who very quickly begins to appreciate his uncle's love of trains and I can imagine readers wanting to be in his position!  It's an unputdownable book & the perfect combination of old-world train travel with a modern day adventure; it's gripping and utterly readable, and the illustrations enhance the story perfectly (& are just wonderful to look at).  This will be a guaranteed hit at school.

Lucy Sladan is convinced there are alien life-forms out there & often heads out looking for them in her hometown, with nothing to show for her efforts ... until one night when she believes she's stumbled on a 'big hairy creature that might have been a Sasquatch' or Bigfoot.  She also meets Milo, a very well-spoken, slightly strange boy; however he may have captured the Bigfoot on his camera-phone, and so begins an unlikely friendship as the pair attempt to discover what on earth is going on in Sticky Pines.
This book is full of quirky characters, from Lucy and her purple hair & conspiracy theories, to Milo & his rather formal attire & a host of others - they are bound to keep readers entertained.  It's full of action and twists & turns that will keep you on your toes and biting your nails.  Think The X-Files meets Gravity Falls; this is the first in a new series and people are going to love it. 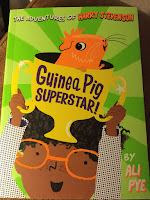 Join Harry and his owner Billy on two new adventures.  In the first, Billy takes Harry to school as his show and tell; however, when one of his classmates also brings a pet, chaos ensues.
In the second, Harry and Maya end up in a rather fancy hotel whilst Maya's parents are guarding Sparky FC's league winning trophy.  Somehow, Harry manages to tag along which causes all sorts of troubles - but can he also save the day?

The Monster In The Lake - Louie Stowell

Kt is back, along with her friends Alita and Josh.  Kit is learning how to be a wizard with Faith by her side; however, things start to go wrong, such a talking animals, and when Lizzie, a Lesser Nessie, turns up in the lake at the local park, the children and Faith set off on an adventure up to the lochs of Scotland to help put things right.
What a great sequel this is: magic & mysterious occurrences that will keep readers hooked.

I'm also adding the link to O's cricket book blog onto here, in case there are any other readers who are as cricket mad as he is!!


We'll do a post about our half-term reads at the end of the week.
at February 18, 2020
Email ThisBlogThis!Share to TwitterShare to FacebookShare to Pinterest

Ben lives with his Aunt Samantha who is, quite frankly, a horrible person.  He has lived with her for the past six years and can't remem... 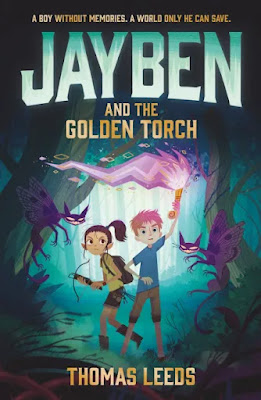