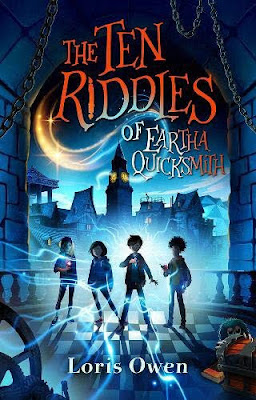 Kip lives with his father, Theo, after his sister went missing years ago at the same time his mother was hit by lightning - she hasn't been the same since and Kip is still coming to terms with that.  Following a string of strange puzzles that seem to find their way to him, Kip is introduced to the world of Quicksmith's College of Strange Energy where children can explore their unique way of thinking and seeing the world.  just after Kip and his new-found friends arrive at the school, a 400 year old letter from the founder of the school, Eartha Quicksmith, is revealed to everyone.  It contains information about 10 riddles that are hidden around the school that need to be solved within the next 10 days - suddenly everybody is on the case.

Friendships play a big part of this book as Kip has been desperately unhappy and lonely in his new school.  Finding his roommate, Albert, as well as the girls, is huge for Kip and gives him a sense of belonging.  There is a wide range of other personalities to get to know, from quirky professors to some rather unusual characters, and I am very much looking forward to seeing how they each evolve as the series progresses.

This is a fast-paced adventure that combines magic and science in an entirely new world where science isn't quite as we know it; from thoughtwaves to wormholes, this is a place that will intrigue readers.  And the college itself is somewhere I can imagine children will be desperate to go to, from the dorm rooms to eating in the Buttery, the different classrooms and everything the grounds holds, readers will be enchanted!

The big plot that runs through the book is that of locating and solving the ten clues that have been hidden.  Each clue is revealed so that the reader can try to work out the answer for themselves ... if they can!  This helps to add an extra element to the story and will definitely keep readers gripped.

There is obviously much more to come in this series and I'm looking forward to returning to the world of Quicksmith's to see what Kip and his friends will encounter next.

The Ten Riddles of Eartha Quicksmith is due for release on the 10th September.

at August 26, 2020
Email ThisBlogThis!Share to TwitterShare to FacebookShare to Pinterest

Me, My Dad and the End of the Rainbow - Benjamin Dean

There are 2 reasons why a a proof copy jumps to the top of my to be read pile: I know/love the author and have been eagerly anticipating the... 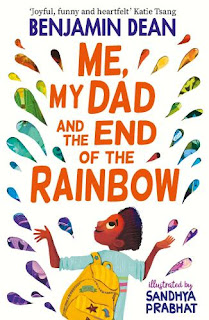