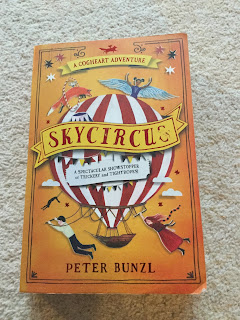 Lily, Robert and Malkin are back for another thrilling adventure, this time in the midst of a travelling circus - called Slimwood's Stupendous Travelling Skycircus - that includes hybrids like Lily: people with a mechanical element added to their body. She is very intrigued and wants to know more about the hybrids, so attends.

Read the book to find out what happens!

It is Lily's birthday, but it seems to her that nobody is paying any attention to her because her father is getting an award from the Mechanist's Guild. Then a parcel comes through the door, containing a letter, a ticket to the Skycircus and her Mama's notebook. She is invited to the show with VIP tickets, so she decides to go to the performance. Meanwhile, Robert is just finishing her birthday present so he can give it to her. When he finds Lily, she shows him the letter and persuades him to go with her, but Robert says they have to be back before 9. Lily doesn't know that her father is going to present a speech about her birthday then, but Robert doesn't want her to miss it. After meeting up with some old friends, Anna and Tollie, she, Robert and Tollie set off to the Skycircus. When they arrive, Lily is pampered with sweets and gifts from two clowns, and then the show begins. After witnessing amazing acrobats, Luca the Lobster Boy and Deedee Long-legs, they watch Angelique Airhart soar around the tent as the finale. After the spectacular show, they try to find the hybrids, but end up being captured by the show's presenters: Slimwood and Madame Lyons-Mane.

Will they escape their clutches? Read the book to find out.

O's opinion
I loved how Lily always wanted to find out about her mother in the book and how adventurous she is, rushing into danger without a second thought, especially when either her or Robert's lives were at stake. I felt that I was living through this book with her and Robert the whole time, it was that intense and realistic! Robert was just trying to look out for his friend and I love that he wanted to keep her safe as she rushed in. The fact that they both looked out for each other in all the tough situations they faced, and that they try to find out as much as they can about Lily's mother whilst being captured impressed me and demonstrated their commitment to each other. This is why they are my favourite duo.

This is by far Peter Bunzl's best novel and I hope he writes another one. The way he makes it seem like I was living this adventure with Lily and Robert is astounding! This is my favourite book so far this year, and that's a long list to compete with! I was overjoyed at being able to write this review as Peter Bunzl is one of my favourite authors. Thank you!

K's opinion
The final instalment of the Cogheart trilogy was eagerly anticipated in our house as we'd both loved the first two books and we were thrilled to be sent an early copy.

The book most certainly didn't disappoint and was a thrilling page turner from start to finish.  It was full of excitement and kept me on the edge of my seat (literally!).  I won't give anything away but it's safe to say that this is a wonderful, poignant end to the series and I actually hugged the book once I'd finished it!

We're now looking forward to seeing what Peter will write next!

at October 14, 2018
Email ThisBlogThis!Share to TwitterShare to FacebookShare to Pinterest

I know Katherine as Katie Webber who writes MG fiction (brilliantly!) with her husband Kevin Tsang.  I knew The Revelry would be very dif... 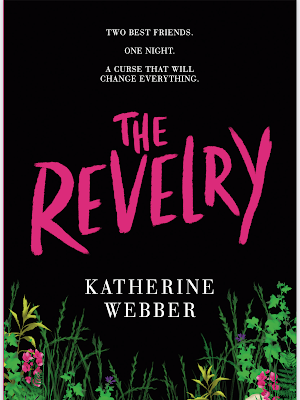